For those of you who may have been at the Reno Air Races this year or maybe watched it online, you got a chance to see some of the best racing in years!

Not only did the T-6 class have some great racing but the Unlimited Class had action that it hasn’t seen in 20 years. It was estimated that last years T-6 racing had only 3 passes the entire year between classes. This year we had about 15 passes just in the Bronze.

It was a fight each race and what a blast!

“Midnight Express” had a great year. We took 4th place in T-6 Silver at an average speed of 215 MPH. Because this years lineup had only 17 T-6’s entered (normally 18 minimum), we volunteered to race last place in the Bronze class to even the ranks. This allowed us to essentially get 2 years of racing in 1.

We had to fight our way forward every race. In the end, our racing in the Bronze was always moved back to last place in fairness to the other pilots who had somewhat slower airplanes.

Although I figured out how to get a little more speed out of her, I couldn’t quite make up enough to get past Race 42.

In the end, 42 cut a pylon and we bumped up to 4th anyway.  Not only that but we got voted “Rookie of the year”. What an honor it was to accomplish this.

We had no major mechanical problems and got some great time on the course. It was a very successful year for Race 94 and the Midnight Express Crew.

Fred Ouweleen joined us on Friday and Saturday for the fun after flying up. We really appreciate the help and promotion we got from PACMIN!

This entry was written by Chris LeFave and reproduced with his permission.

For other race results, visit the Reno Air Races website.

Posted in Inside PacMin Studios and tagged reno air races 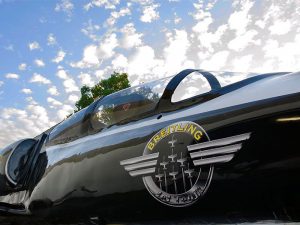 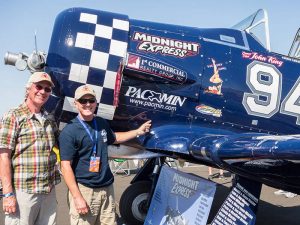